Ushio Reina (潮 礼奈, Ushio Reina?) is the vicepresident of Oodachi High's student council, one of the Sumo club's managers, Yūma's younger sister and as of the epilogue, Ushio Hinomaru's wife. 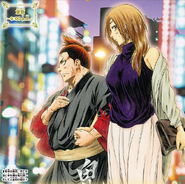 During high school, she was seen as quite pretty, wearing her dark blonde hair in twin tails, as well as using the Oodachi girl's uniform. During her time in the club, she wore the sports gear, consisting of a T-shirt and sweatpants.

As an adult, she is tall, slender and well-proportioned, wearing her hair in a layered cut. She seems to favor dresses and skirts, showing that despite her temper, she is still quite feminine.

In high school, she was a member of the Student Council (although she never did her share of work), but she despised the Sumo Club due to her opinion about the sport being 'uncool' and couldn't understand why her brother had joined the team. Eventually, thanks to the club, and especially one member of it, she started seeing sumo in a new light, became one of its managers and gained a healthy respect for it. Also, as Kunisaki smartly surmised, she had a brother complex.

As a university student, she's shown as a person who not only tries her best to understand sumo, but explains what she knows to newcomers. She also became more assertive, especially when angry, and despite feeling embarrassed about it, she speaks her mind openly towards Hinomaru when she disagrees with him, leading him to allow himself to show his vulnerability around her, which she does her best to respond as gently as possible. Despite this, her attitude also compliments Ozeki's soft-spoken style, often giving rousing rally speeches when Ozeki feels too shy to do so as a captain.

However, she knows she doesn't have much knowledge of the sumo world, and it was noticed by Ogawa Tokio as to how she stayed by Hinomaru's side despite not knowing much about the sport (such as the fact that it's illegal for rikishi to drive), or how she could be a better manager and assistant. She feels frustrated when she can't help, stop, or support Hinomaru, which leads her to rely on Saki, Hori and even Jinou's wife, Yumi, for advice. One way she was able to help Hinomaru early on was to help him navigate around technology, because he is so technologically challenged, that she had to teach him about smartphones and internet shopping, which helped Hinomaru solve the 100-yen meal question. Thanks to that, she finds ways to become more useful not just for Hinomaru, but also for Shibakiyama stable, as seen when she made it so Kaoruyama could see the tournament from his hospital room.

When Hinomaru and Yūma have a fight over the reclaiming of the sumo club's dojo, Reina overhears a group of students talking about the event.[1]

Community content is available under CC-BY-SA unless otherwise noted.
Advertisement