Hikage Tenma is a student from Kanazawa Kita High School and a member of its sumo club. He has won the title of Middle School Yokozuna in his third year. In high school he lead Kanazawa Kita High School to third place in tag team bouts during his first year. He won the the title of High School Yokozuna during individual bouts in his third year. He conquered the All-Japan Championship acquiring a Tsukedashi qualification. After graduating High School he joined Suzugatake Stable, to which his brother used to belong.

Tenma is an extremely tall light skinned man with a great muscular build. He has big, black,curly hair and sharp,black eyes which are usually hidden underneath his hair. Without a doubt he is among one of the largest high school sumo wrestlers, easily dwarfing both Kunisaki Chihiro and Tennōji Shidō. He wears the typical Kanazawa Kita Sumo Club's mawashi belt which is beige in color with the exception of a single light green stripe on the left near the front. Tenma also sports black hand straps that wrap around both his thumbs and extend towards his wrists. His casual attire generally consists of a white t-shirt and yellow pants.

Unlike his brother, he is far more dedicated in his craft to become a yokozuna. Despite his individualistic ideals, he actually cries a lot about his seniors. Hence he was so aggrieved after he lost to Chihiro Kunisaki, when the high school club was knocked out 0-3 by Oodaichi High, despite him being the only one left in the individual competition.

He's also notorious for being highly asocial, disliking many of his fellow wrestlers. The only person he seems to be relatively close to aside from his brother is Onimaru, with whom he shares books and comics.

He is known for his strength and a quick and powerful strong toss, and a quick open palm strike, and he has all-round range in terms of attacking options. 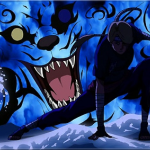